13 September 2022, Albuquerque, NM, USA – BayoTech, Inc. (“BayoTech”), an innovator in hydrogen solutions, announced the Detroit region as the next location for the expansion of its distributed hydrogen network in partnership with the American Center for Mobility (“ACM”). ACM’s 500-acre site in Ypsilanti Township will be home to a BayoGaaS™ Hydrogen Hub, producing 350 tonnes per year of low-carbon hydrogen.

ACM is a global center for testing and validation, product development, education, and standards work for future mobility technologies. Demand from global automakers planning to test zero-emission fuel cell vehicles at the site led ACM to seek out a hydrogen fueling solution.

“Hydrogen has a crucial role to play in enabling zero-emission vehicles in key segments of transportation,” said Reuben Sarkar, ACM’s President & CEO. “The infrastructure going into ACM will not only support users of our facility but the needs for low-carbon hydrogen in the region. 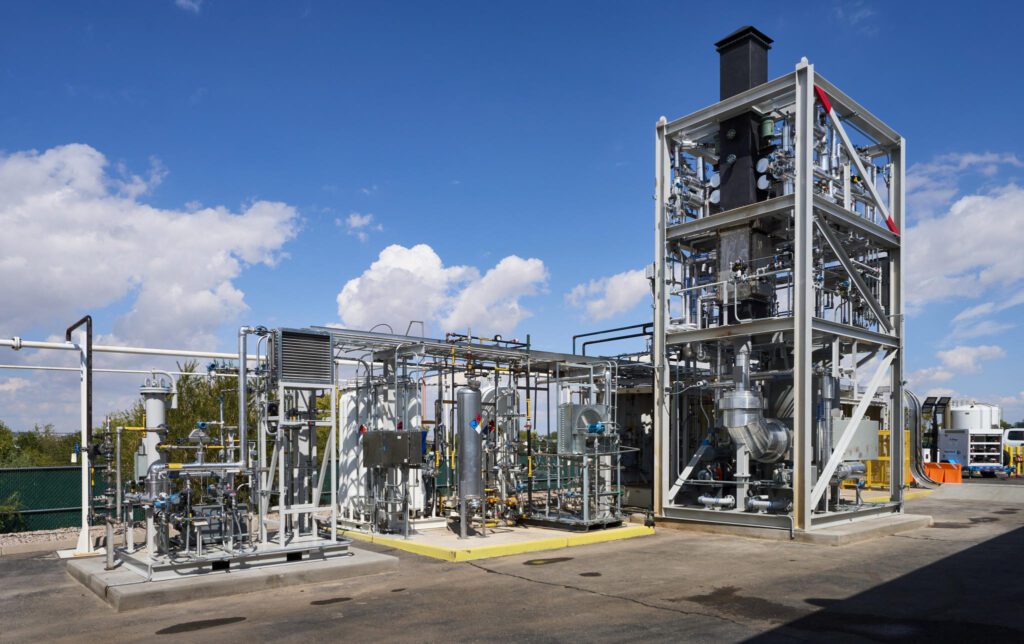 With more than 25 years of research and development with hydrogen and fuel cell electric vehicles, Toyota’s nearby R&D facilities make ACM a viable location for current and future testing. Toyota currently sells the light-duty Mirai passenger vehicle, and it recently completed a proof of concept project with ten heavy-duty fuel cell trucks built in partnership with Kenworth.

“We believe fuel cell electric technology will play a vital role as we work toward a carbon-free future,” said Matt Stich, General Manager, Toyota Fuel Cell Solutions. “Additional infrastructure and the ability for companies to test future technologies at places like ACM will only help grow the fuel cell market moving forward.”

Hydrogen, produced by BayoTech’s well-proven and safe technology, will serve the global manufacturers, OEMs, and mobility innovators testing and validating vehicles at ACM’s facility. It will also be delivered via BayoTech’s proprietary high-pressure transport trailers to local customers operating zero-emission fuel cell equipment or hydrogen-intensive industrial processes in and around Michigan. BayoTech’s hydrogen hubs are strategically located close to the customers, so delivery is a short-haul – lowering both emissions and cost.

“Hydrogen is fueling the future of transportation. We congratulate ACM for being innovators in seeking out the infrastructure to support automotive OEMs’ fuel cell vehicle commercialization activities,” said Adam Penque, BayoTech’s SVP of Sales & Hydrogen Hubs. “We’re proud to partner with ACM to launch our latest hydrogen hub location.”

Brenda Stumbo, Ypsilanti Township Supervisor, commented, “Willow Run assembly plant in Ypsilanti Township is among the most important places in Michigan’s industrial history. Eighty years after the last World War II fighter plane was assembled there, it’s evolved to become the leading test center for future mobility solutions. I commend ACM and BayoTech on this initiative to bring innovative hydrogen technologies to our community in support of next-generation transportation technologies.”

Congresswoman Debbie Dingell said, “We know that in order to tackle climate change, we have to address auto emissions. This investment will create high-value, good-paying jobs in our community and produce low-carbon fuel that will reduce local emissions and power the technology of the future. I’m proud to see Michigan continue to lead the way toward our electric vehicle future and a more sustainable and successful mobility industry.”

BayoTech, an innovator in hydrogen solutions, is committed to addressing the global need for reliable, cost-effective, and low-carbon hydrogen. BayoTech sites hydrogen production close to demand and distributes it to nearby consumers via high-pressure gas transport and storage equipment. Customers are accelerating the decarbonization of their energy and transportation systems with BayoTech. Learn more at www.bayotech.us

These statements involve risks and uncertainties that may cause BayoTech’s actual results to be materially different, including general economic and regulatory changes, detrimental reliance on third parties, successfully achieving our business plans and achieving and sustaining profitability. Readers should not place undue reliance on BayoTech’s forward-looking statements and BayoTech assumes no obligation to update or release any revisions to these forward-looking statements, other than as required under applicable legislation.