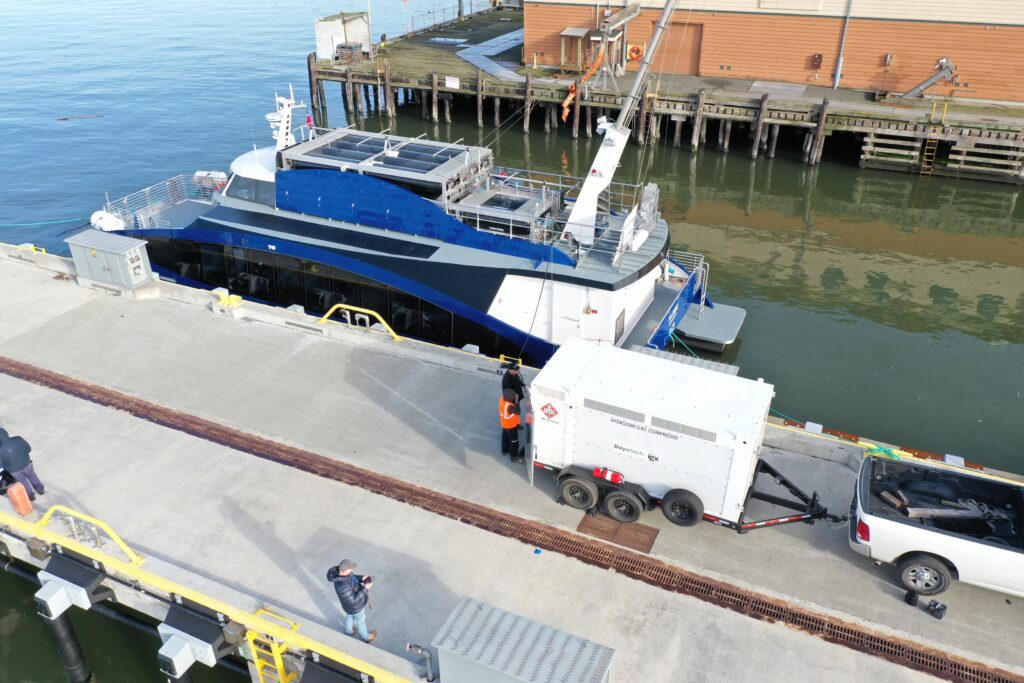 SWITCH Maritime is pleased to announce the world’s first hydrogen fueling of a commercial marine vessel was successfully completed on November 18th at All American Marine shipyard, and the vessel is now beginning its final sea trials before delivery. The event is monumental step towards decarbonization of the worldwide shipping industry and showcases the United States’ energy transition away from fossil fuels.

The new 75-passenger ferry, called the Sea Change, received hydrogen into its 242 kg tanks on the upper deck.  It uses that hydrogen in fuel cells producing electricity to power electric motors for distances up to 300 nautical miles, and speeds up to 20 knots – similar capabilities as diesel-powered vessels – with the added benefits of zero exhaust smoke or other emissions and very little vibration and noise.

The fuel loaded in the vessel’s tanks includes green hydrogen, produced in California by an electrolyzer powered with renewable solar power, which results in zero carbon emissions in the production of the fuel as well.

“While it’s taken us years to get to this point, the timing couldn’t be better” says Pace Ralli, CEO of SWITCH Maritime. “In this moment, our nation is more committed than ever to making the transition to a carbon-free economy. Hydrogen will play a major role in that future, and major players in the maritime industry are ready to decarbonize. We are grateful to all our partners, and proud to play a small role in accelerating the widescale adoption of hydrogen power. Hopefully this is just the first domino to fall.”

The fueling follows the regulatory approval in October by the United States Coast Guard (USCG) of the hydrogen powertrain and storage systems onboard the Sea Change, representing the culmination of years of cooperation with the USCG focused on safely integrating hydrogen power and storage systems on passenger vessels. The achievement of this significant milestone unlocks the possibility of many future deployments of similar hydrogen power systems on all vessel types – including ocean-going containerships.

Zero Emission Industries (ZEI), formerly Golden Gate Zero Emission Marine, is responsible for the design and development of the first-of-its-kind maritime hydrogen and fuel cell system as well as the vessel’s unique fueling system that allows it to be fueled directly from a hydrogen truck, and was responsible for the successful regulatory approvals of all hydrogen-related aspects onboard. ZEI is a cutting-edge hydrogen technology company that develops and sells turnkey hydrogen power systems, advanced fuel cell balance of plant sub-systems, fueling systems, and proprietary safety systems for a range of applications.

“We’re super excited to see the Sea Change start sea trials, and I felt proud watching our fueling and hydrogen systems operate in the real world for the first time,” said Danny Terlip, Lead Engineer at ZEI. “Our whole mission at ZEI is to build new technology that makes hydrogen accessible and easy to use, and this event demonstrates how far we’ve come.”

For the fueling during sea trials, SWITCH has engaged West Coast Clean Fuels (WCCF) to develop and permit the end-to-end clean fuel supply chains that will deliver hydrogen to the Sea Change, as well as BayoTech, for high-pressure gaseous hydrogen delivery to Sea Change during sea trials in Washington using transport trailer-to-ship transfer.

SWITCH’s vision is to achieve a fully zero-carbon fueling supply chain of green hydrogen, which is currently in short supply in the US. Building more and larger vessels that demand large volumes of hydrogen offtake will increase green hydrogen production volumes, and drive the cost of hydrogen lower than diesel, further advancing the rollout of hydrogen-fueled fleets.

About the Sea Change

The Sea Change project is managed and financed by SWITCH Maritime, an impact investment firm building the first fleet of exclusively zero-carbon maritime vessels for adoption by existing ship owners and operators.  It is the first of the larger zero-carbon ferry fleet that SWITCH plans to construct in 2022, in partnership with municipalities and shipowners aiming to transition to carbon-free vessels, leveraging government grant funds related to transportation decarbonization activities targeted by the landmark US infrastructure bill.

Launched in August at All American Marine shipyard in Bellingham, Washington, the Sea Change is a 70-foot catamaran ferry designed by Incat Crowther, equipped with a hydrogen fuel cell system from ZEI, which includes 360kW of fuel cells from Cummins and 242kg of hydrogen storage tanks from Hexagon, and a 600kW electric propulsion system from BAE Systems which includes 100kWh of lithium-ion battery storage from XALT. The construction management was led by the Hornblower Group. Having successfully performed the first hydrogen fueling, the Sea Change is now performing final operational sea trials prior to delivery from the shipyard and before starting operations in the California Bay Area in Q1 2022.

The project is also partially funded by a $3 million grant from the California Air Resources Board (CARB), administered by the Bay Area Air Quality Management District (BAAQMD), that comes from the California Climate Investments initiative, a California statewide program that puts billions of cap-and-trade dollars to work reducing greenhouse gas emissions, strengthening the economy, and improving public health and the environment—particularly in disadvantaged communities.

Additionally, the project received the first ever loan guarantee under BAAQMD’s Climate Tech Finance program, which seeks to reduce greenhouse gases by accelerating emerging climate technologies. In partnership with the California Infrastructure Economic Development Bank and the Northern California Financial Development Corporation (NorCal FDC), the Climate Tech Finance team led a technology qualification and greenhouse gas analysis that deemed SWITCH eligible for a loan guarantee. This loan guarantee supported SWITCH in securing a $5 million construction and term loan with KeyBank, which enables SWITCH to bring this important project to completion.

All American Marine Inc., located on the shores of Bellingham Bay, was founded in 1987 and specializes in the construction of custom-tailored aluminum vessels.  The company is a leading builder of high-speed passenger boats, hybrid vessels, dinner cruise boats, patrol crafts and research vessels. AAM is a proud member of the Bryton Marine Group. Stay tuned to AllAmericanMarine.com or on Facebook and Instagram for all the latest news on what’s next!

“Incat Crowther is a team of engineers and innovators who provide design, build and consulting services for specialized ships from offices located in the United States, Australia, and the United Kingdom.  Incat Crowther has a 30 year history with over 600 vessels in operation.  As a Digital Shipbuilder, Incat Crowther has the versatility to propose multiple design and construction solutions leading toward an operator-driven optimum solution.  Latest company news is available on social media or at incatcrowther.com.”

WCCF was established to serve a growing market need for the delivery of future low-carbon maritime fuels, such as LNG (liquefied natural gas), RNG (renewable natural gas), and hydrogen-based fuels (such as hydrogen, methanol, and ammonia). WCCF has designed the initial supply chain based on smaller delivery volumes using truck-to-ship fuel transfers, with the ability to scale as SWITCH’s hydrogen-fueled maritime fleet expands.

BayoTech, an innovator in hydrogen solutions, is committed to addressing the global need for reliable, cost-effective, and low-carbon hydrogen. BayoTech sites hydrogen production close to demand and distributes it to nearby consumers via its patented high-pressure gas transport and storage equipment. Customers are accelerating the decarbonization of their energy and transportation systems through BayoTech’s supply of hydrogen molecules, sale and lease of equipment, and zero-emission power solutions. Learn more at www.bayotech.us.

Funding for the CARB grant for the country’s first zero-emission ferry comes from California Climate Investments, a statewide program that puts billions of Cap-and-Trade dollars to work reducing greenhouse gas emissions, strengthening the economy and improving public health and the environment — particularly in disadvantaged communities. Further information is available at https://ww2.arb.ca.gov/homepage

The Bay Area Air Quality Management District is the regional agency responsible for protecting air quality in the nine-county Bay Area. Connect with the Air District via Twitter, Facebook, and YouTube.

Why High-Pressure Trailers are the Future of Hydrogen Transport